To map a love song, I’m using coordinates and the musicalgorithms generator. The idea is to create melodies from the coordinates that trace a certain path in the city – a path provided to me by people in Ottawa, highlighting important places in their love story. The goal is to create an app that will track as you follow the path, allowing the song/story to evolve. This will get especially interesting as more and more people start participating, because spaces, songs, or paths may start to overlap and cross. You might start on the path of one love story, and end on another. For now, you can visit the Maps hosted on this site, where you will find coordinates and paths marked by geolocation pins. If you click on a path, you will then be able to access the story behind that particular location – when available. Each story has its own map, and under each map you will find the link to Soundcloud and [at]ottlovestories’ playlist on Apple Music as they become available.

To begin and test it out, I focused on the story of Patricia and Bud. In order to generate the data I need to input on musicalgorithms, I first have to choose the geographical places to include on the map.

Patricia and Bud’s story starts in Whitney, ON, just outside of Algonquin Park. Then, throughout the article, a few other locations are highlighted (in no particular order at this point):

Once I have the locations, I can start plotting them onto Google’s my maps. I make two layers per story on each map: one with just the geolocation pins, the other with a path connecting them all. Use the pin maps to see and read the stories, use the path to follow along to the love songs as you walk.

But how did I get from the places to the song? Using the base set of coordinates…

…I can very easily make the path on the map. At first, I was just plugging these specific coordinates into musicalgorithms. The songs were really short, though, and it wasn’t close to the effect I wanted (as if the coordinates were constantly being sonified as you’re walking). I don’t have the skills to make an app, so I cheated for now – with some research. Once you have a path, you can actually generate a bunch of random coordinates along the entire thing through Google. Here’s how you do it: 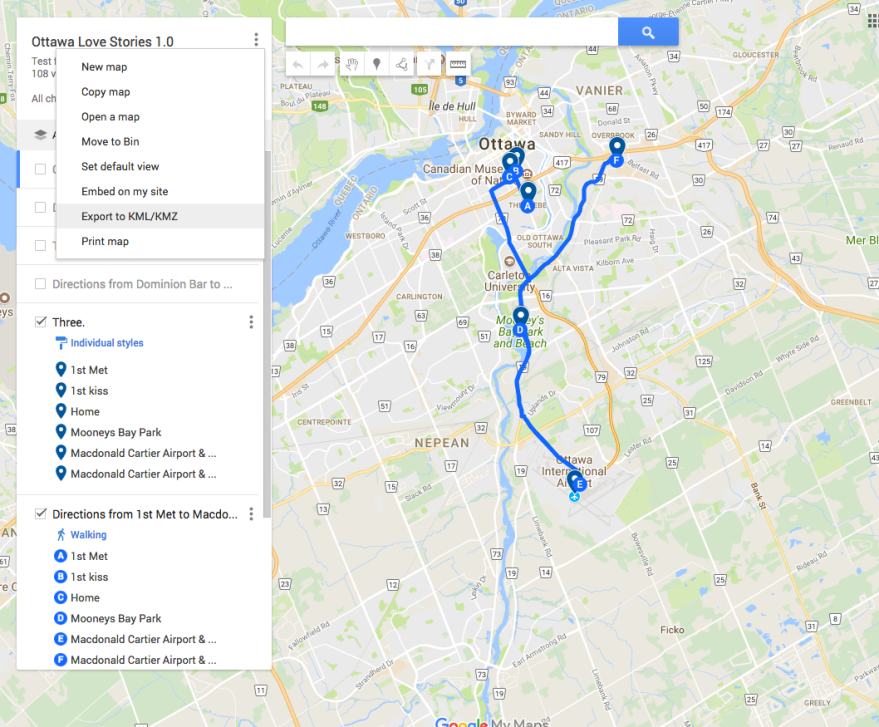 Click the three vertical dots next to the title of your map on my maps, and select “Export to KML/KMZ”. You don’t want to export the entire map if you have more than one layer, and you don’t want to include the pins – just the path. So you select the “Directions from…” tab that you’d like. 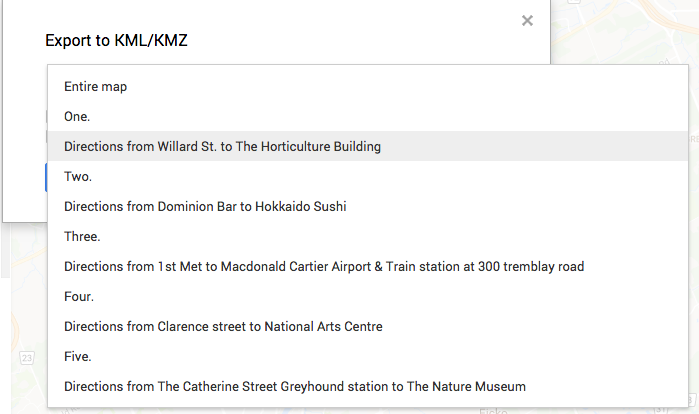 Next, you select only the “Export to a .KML file” and download.

Sometimes, you’ll have to compress the downloaded file, the open it for it to work. When you open it with a plain text editor, like TextEdit, scroll down until you see your coordinates:

It’s important to remember that sonified data doesn’t always sound “good.” That’s because these are not purposefully composed melodies: they are created from random data. While this data might make sense as coordinates and on maps, they don’t make the same sense when transposed. But, what’s really interesting is that, through this project, I’ve realized that Ottawa love stories have their own unique “sound”. This is simply because, since all the stories take place in the same city and its surroundings, they’re all located at 45 and -75 degrees latitude and longitude: because these same numbers come up again and again, there’s a certain set of notes that make up the “sound of Ottawa”. Listen closely to the songs and see if you can hear it.

On musicalgorithms, you can choose how to scale your data (major key, minor key, blues, etc). This, I think, will depend on the place or story that each location is telling.

If you are interested in sharing a love story, email me at ottlovestories@gmail.com or through the contact form on the site. I would be more than happy to collaborate, or even to leave the melody-making in your hands if you prefer. Let’s chat!

The land on which these stories take place is the traditional unceded territory of the Algonquin Anishnaabeg People. Ottawa is still the home to many Indigenous people from across Turtle Island and I am grateful to have the opportunity to live and work in this territory, and tell these stories.